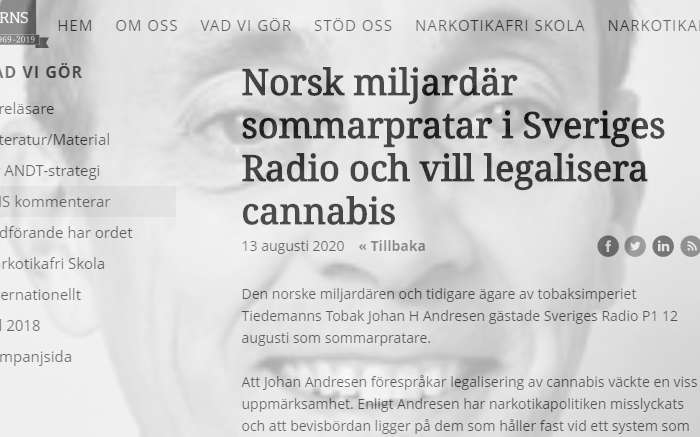 Last week, Sveriges Radio hosted Norwegian billionaire Johan H Andresen as a speaker on their summer program where he discussed, amongst other things, cannabis legalisation. While there are harms associated with legalising cannabis, Andresen believes current drug policy is even more harmful, and that it simply hasn’t worked. Hence, the burden of proof lies with those who support Sweden’s existing drug policy.

The program elicited a response from Riksförbundet Narkotikafritt Samhälle (RNS), Sweden’s oldest anti-drug lobby group founded by Nils Bejerot. In a comment published on RNS’ website, Staffan Hübinette takes a swipe at Andresen. While there may be some shortcomings to Sweden’s current drug policy, Hübinette claims that it’s inaccurate to say that it’s not working. Moreover, he claims there’s mounting evidence of problems in Colorado after it legalised recreational cannabis. Therefore, Hübinette argues, the burden of proof lies with those supporting a legalisation of cannabis.

Worth highlighting that Hübinette is not just any fringe anti-drug lobbyist. He is active in Sweden’s Narkotikafri Skola, Narkotikapolitiskt Center, and has participated in the Ministry of Social Affairs’s working group overseeing Sweden’s newest drug strategy (ANDT).

Anti-cannabis lobby groups like using Colorado as a comparable given that it was the first state to legalise recreational cannabis, and also given its high prevalence of cannabis use. What they don’t say is that prevalence there was high long before legalization. Hence, it’s not entirely comparable.

Nevertheless, while results from Colorado’s legalization of cannabis are mixed, they don’t corroborate with Hübinette’s dire picture (we go through each of his points further down below). Fears that legalisation would lead to a spike in adolescent cannabis use have not materialized. Nor have we seen any relative negative spike in high school drop-out rates1, violent crimes2, and prevalence of serious mental illness3 (incl. schizophrenia). In other words, the Colorado sky has not fallen.

On the contrary, according to a recent survey conducted by YouGov, the vast majority of Coloradans (71%) believe that legalization has been a success4. Same goes for other states that have legalized cannabis. On a nationwide basis, a record two-thirds of Amerians are now in favor of legalizing cannabis5. And note also that no country or U.S. State has reversed course after legalising cannabis.

One would expect that if the problems associated with legalising cannabis really did outweigh the benefits, that support for legal cannabis would falter; yet it has not.

Finally, it is worth reflecting on the outcomes of Sweden’s zero-tolerance drug policy — a policy which Hübinette believes actually works.

In fact, overall drug use, drug abuse, and drug-related deaths have all increased according to a report published by Folkälsomyndigheten earlier this year8. Note that Sweden’s drug related deaths per capita now ranks as one of the highest in Europe9.

These negative trends have developed despite a huge increase in resources spent on chasing drug users. Since 1988, the number of reported drug offences in Sweden has surged by nearly 400%, to over 7% of total reported police offences10. The number of mandatory urine or blood tests associated with suspicion of drug offense has also nearly quadrupled during this period11 with no effect on lowering overall drug use.

Sweden’s strong focus on penalizing drug users, especially cannabis users, has largely been driven by a “signalpolitik” where there is scant evidence of efficacy. In fact, in a 2011 analysis compiled by the European Monitoring Centre for Drugs and Drug Addiction (EMCDDA), the agency found no association between changes in cannabis penalties and cannabis use12.

So one has to ask Hübinette, what about Sweden’s overall drug policy actually works?

1. Cannabis use in Colorado is rising and materially higher than in Sweden

Since adult-use legalisation went into effect in 2014, cannabis use has increased, but at a slower pace than the National average. Moreover, adolescent use has declined more than national average. Hence, on a relative basis, cannabis use in Colorado is not spiraling out of control, as inferred by Hübinette.

2. Increased use and frequency of use in Colorado translates to an increase in cannabis use disorder.

Frequency of cannabis use in Colorado has indeed increased, however we don’t know if that has translated to increased cannabis use disorder post legalisation. This is because America’s Substance Abuse and Mental Health Services Administration (SAMHSA) does not report state-wide data on a regular basis. We do know that overall substance use disorder in Colorado was lower in 2017 vs. 2012 (i.e. before cannabis legalisation)13.

3. The number of children exposed at home has been rising, as has the number of accidental ingestions (as implied by increased calls to poison centers).

Exposure to cannabis in homes in Colorado has indeed increased. This is a negative development, which needs to be addressed through improved policy measures.

Calls to poison centers and ERs have also increased, but we don’t know if this is because people feel more comfortable calling authorities post legalisation. More time/data will be needed to measure actual impact.

4. The negative costs associated with cannabis legalisation outweigh related tax revenues by a factor of 4.5x. Hence, legalization has been a major cost burden on Colorado’s State finances.

RNS references these statistics from a non-peer reviewed report published by Centennial Institute, a conservative religious Christian organisation based in Colorado. The analysis has been dismissed by researchers and policy makers due to its questionable assumptions15.

For example, the report suggests that the largest negative cost associated with Colorado’s legalisation is the high-school dropout rate. But what the study doesn’t say is that Colorado’s high school drop-out rate has declined since legalisation, from 2.4% in 2013/14 to 2.0% in 2018/1916. Graduation rates, on the other hand, have increased during this period. Perhaps this is because a portion of the tax revenues from cannabis sales are reinvested in Colorado’s education system.